First of all, let’s get some terminology straight. A snowstorm is when a large amount of snow falls in a relatively short period of time. A 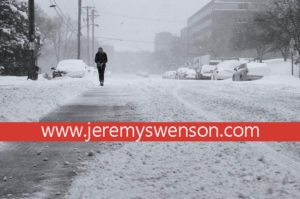 blizzard is then snow falls when there is also high wind speeds, in excess of 35 miles per hour causing limited visibility. We have seen some pretty big snow storms and some very intense blizzards over the years as well as the amazing damage they can do.

Everyone has a story about “the big one” and there certainly have been historic storms across the U.S.A. including:

> In the three year winter period from December 1885 to March 1888, the Great Plains and Eastern United States suffered a series of the worst blizzards in this nation’s history ending with the Schoolhouse Blizzard and the Great NYC Blizzard of 1888.
> Armistice Day Blizzard of 1940 November 10–12, 1940 took place in the Midwest region of the United States on Armistice Day.
> The Great Storm of 1975 known as the “Super Bowl Blizzard” or “Minnesota’s Storm of the Century”. January 9–12, 1975. Wind chills of −50F to −80F recorded, deep snowfalls.
> 1991 Halloween blizzard Upper Mid-West US, October 31 – November 3, 1991

> The Storm of the Century, also known as the Great Blizzard of 1993 started in the Gulf of Mexico and dissipated over the North Atlantic 3 days later.
> Hurricane Sandy October 29–31, 2012. West Virginia, western North Carolina, and southwest Pennsylvania received heavy snowfall and blizzard conditions from this hurricane.

But it is hard to imagine what the residents of Iran endured in a 1972 storm which caused 4,000 reported deaths, and was the deadliest blizzard in recorded history. Dropping as much as 26 feet (7.9 m) of snow, it completely covered 200 villages. After a snowfall lasting nearly a week, an area the size of Wisconsin was entirely buried in snow.

When you’re in an area about to be impacted by heavy snow, take precautions as recommended by the U.S. Department of Homeland Security.

If you have questions about preparing your business or commercial property for snow, we are here to help. Call Swenson Consulting at (816) 564-9131.

DISCLAIMER: Information contained in this Website and blog is intended for informational purposes only and do not necessarily reflect the direct opinions, views or practices of Swenson Consulting or its consultants. The individuals who maintain this blog work for Swenson Consulting. The information, comments and links posted on this blog do not constitute legal advice. No attorney-client relationship has been or will be formed by any communication(s) to, from or with the blog and/or the blogger. All decisions relating to the content of the website blog belong to the blogger and management company responsible for the blog for the purpose of aggregating relative industry specific information related to snow removal.